The global COVI-19 pandemic has triggered profound shifts in the world and requires more reflection on global governance, according to Justin Yifu Lin, honorary dean of the National School of Development at Peking University, who spoke at the International Investment Forum during the ongoing China International Fair for Investment and Trade.

From 1945 to 2020, humankind has experienced the most peaceful period in history and has witnessed the four Asian tigers, Singapore, South Korea and the Chinese territories of Taiwan and Hong Kong develop from the most impoverished regions to economic powerhouses in the world under the global governance system.

The Chinese mainland has achieved an average economic growth rate of 9.4 percent per year for 41 consecutive years since reform and opening up was introduced in 1978, Lin said.

"It can be said that there has been no other country or region in human history that has maintained that growth for such a long time."

By 2025, the Chinese mainland is expected to grow from a middle-income country to a high-income one, Lin said.

Since the end of World War II, most of Latin America and African countries have stayed in the low-income stage, Lin added.

Currently, the world's population living on less than $1.9 per day is 1.3 billion, he said, adding that research estimates the global COVID-19 pandemic might result in 400 to 600 million people slipping back into poverty.

Many developing countries are confronting unstable factors in society due to poverty problems. While, developed countries have seen weak economic growth since the 2008 financial crisis, and unequal income distribution has resulted in populist movements in these countries, Li said.

This has caused an anti-globalization wave and some fall out among countries and regions in global governance, he said. 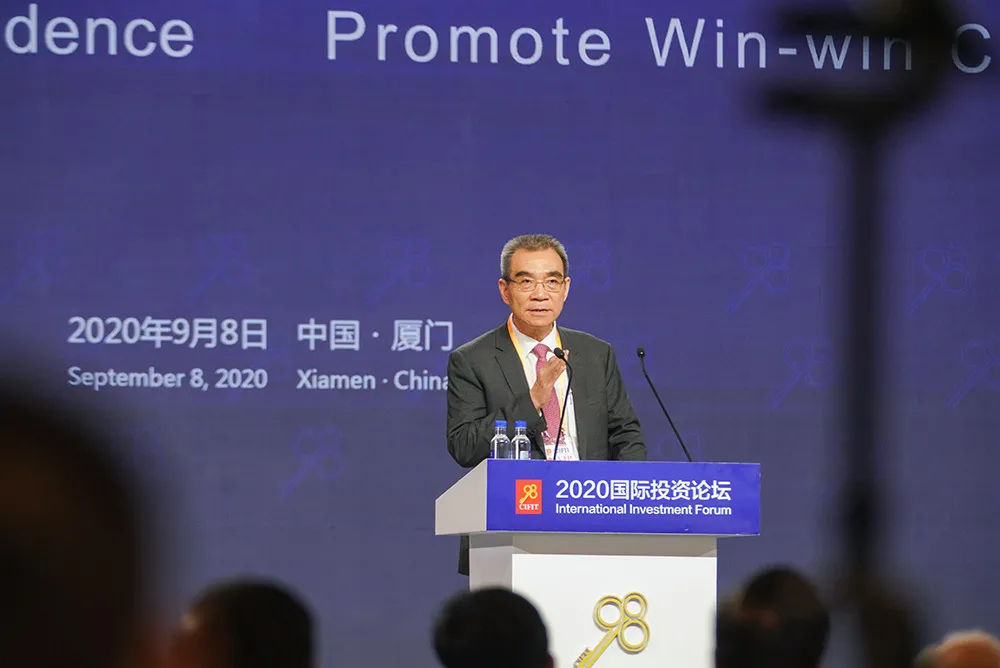 Justin Yifu Lin, honorary dean of the National School of Development at Peking University, delivers a speech at a forum during the 2020 China International Fair for Investment and Trade. [photo by Xiao Heyong/Xinhua]

However, the great disparity in economic development between some countries and regions has provided some reference on economic governance, according to Lin.

Since the end of World War II, 13 economies have achieved a 7 percent or higher growth annually, according to a research committee led by Nobel Laureate in economics.

These economies all developed their economies through mobilizing domestic and international markets, maintaining a stable macroeconomy with high investment and saving rates. They all boast active markets, Lin said, that means these economies succeed in developing their market economy based on their comparative advantages and governments' active guidance to boost enterprise development.

Reviewing the global economic governance since the end of World War II, Lin summed up that it is not a solution for developing countries to directly replicate the industrialization and modernization from developed countries.

A handful of developing countries or economies that have excelled in developing economies all adhered to seeking truth from facts led by governments and markets, Li said.

In terms of global governance under the new circumstances, Lin called for developing countries to figure out solutions from their own lessons and experience.

The United Nations-centered global governance system is complete, Lin said as the world's second-largest economy and the biggest trader in goods, China is obliged to summarize and share its experience and to cooperate with other developing countries to seek their own development mode, Lin said.

Under the current global governance, if all countries can develop through the joint efforts of governments and markets, the world will achieve common prosperity as a community with a shared future for mankind, he added.