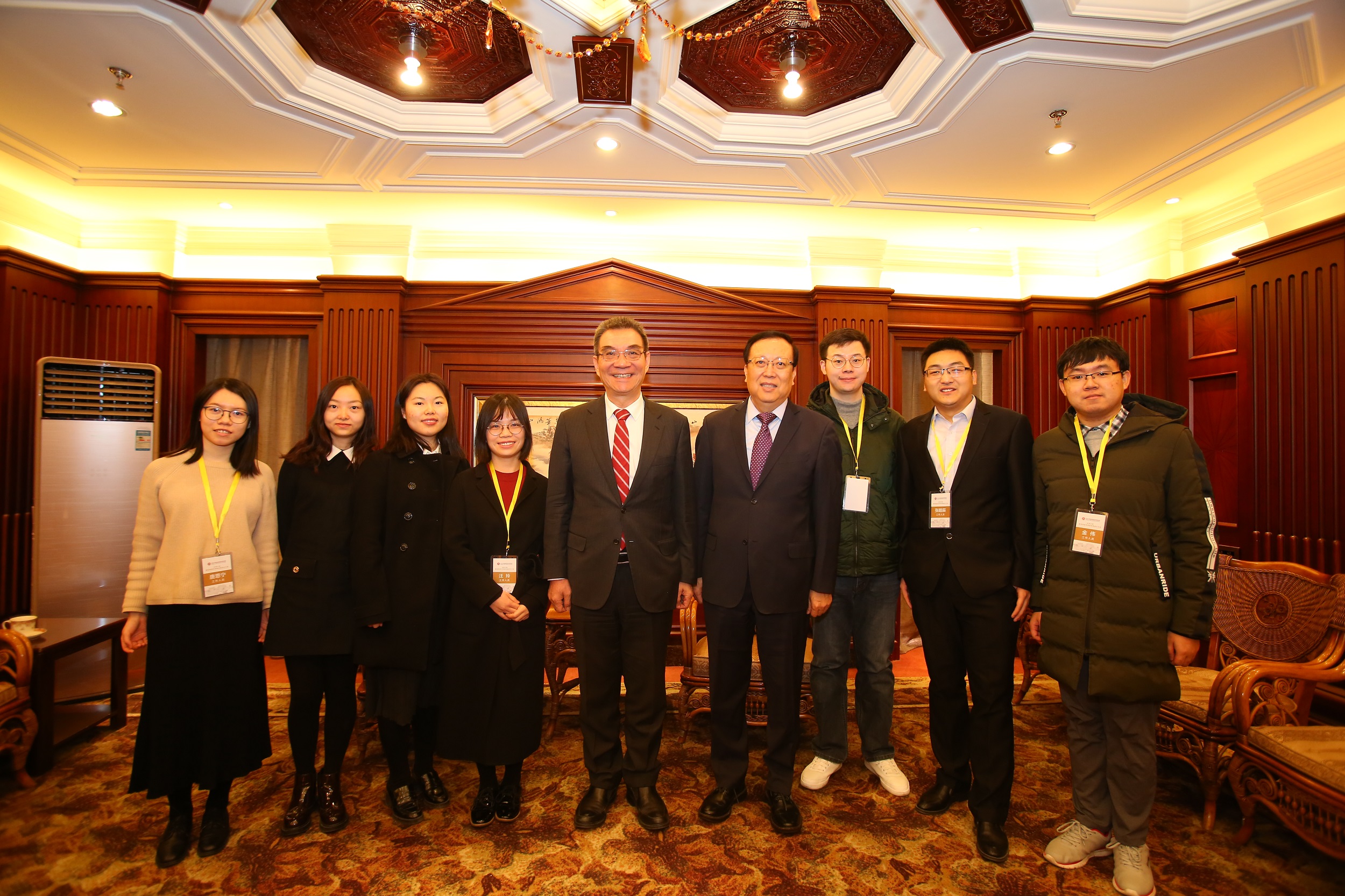 Before the ceremony, Ping HAO and Justin Yifu LIN met with the first six doctoral students enrolled in INSE in 2018 in the VIP room and had a cordial exchange with them. Ping HAO encouraged the students to cherish the opportunities, be down-to-earth, and strive to become outstanding successors of China’s socialist path and development.

At 09:00 in the morning, Jiajun Xu, Executive Deputy Dean of INSE, chaired and declared the opening of INSE inauguration ceremony. 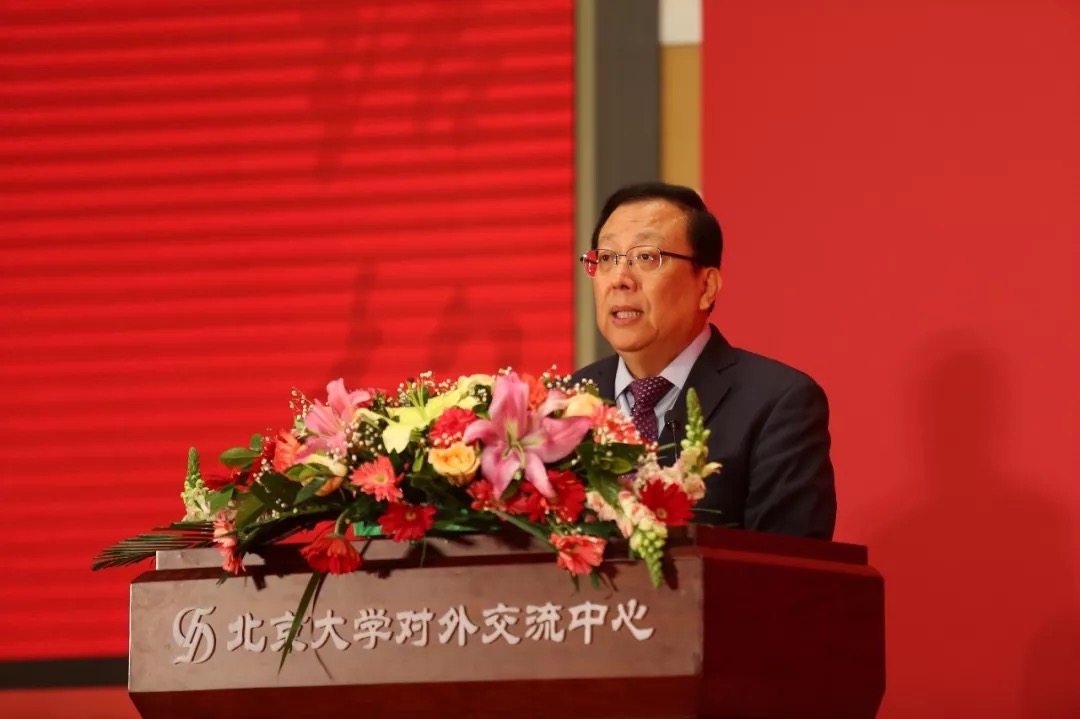 Ping Hao delivered the opening speech. He pointed out that “New Structural Economics” is an important achievement in conducting scientific frontier research and knowledge innovation by Chinese intellectuals based on the reality of China and other developing countries. As INSE blazed the trail of independent theoretical innovation in social sciences in China. Mr. Hao hoped that it will continue to actively deepen independent theoretical innovation, consolidate the foundation of discipline construction, promote practice, exchanges and cooperation at home and abroad, and cultivate high-quality and innovative global talents to make an outstanding contribution to human knowledge and well-being, and to the great rejuvenation of the Chinese nation. 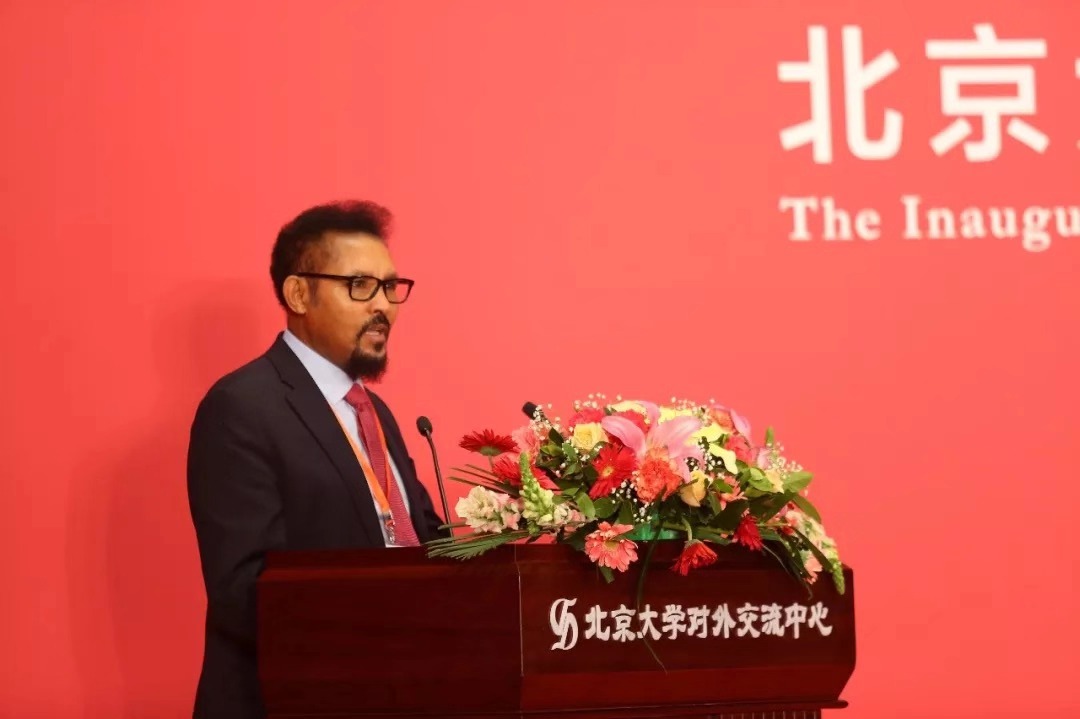 Arkebe Oqubay warmly congratulated on the opening of INSE, and acknowledged Ethiopia’s gratitude to professor Justin Yifu Lin and INSE for providing development strategy and policy consultation and development practice supports. He emphasized that theories must stay in line with policy making perspectives so as to affect and contribute to real development. New Structural Economic is born out of the real experiences from China and other developing countries, and provides fresh thoughts on development to African developing countries, hence gaining recognition by many African leaders. 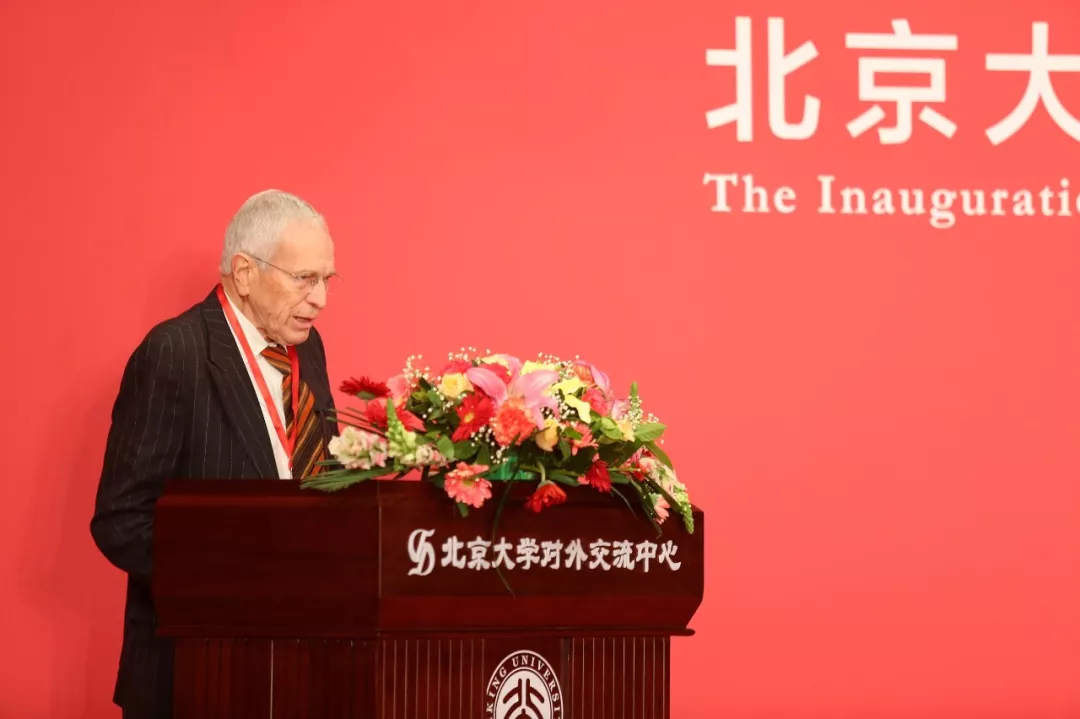 Edmund S. Phelps said that Professor Lin has been at the forefront of development economics for the past few decades, and the establishment of INSE is timely, because now China's access to technology transfer from the rest of the world is basically smaller. He hoped that when China is running out of opportunities and the West is running out of ideas, the establishment of the institute can offer a viable alternative to find a way out of the dilemma. The new partnership between China and the west may be an important responsibility for the institute. Guiqin Liu hoped that INSE will continue to advance and lead the independent theoretical innovation, promote the development of the discipline, displaying the image of China and playing the role of viaduct that bridging China and the rest of the world. 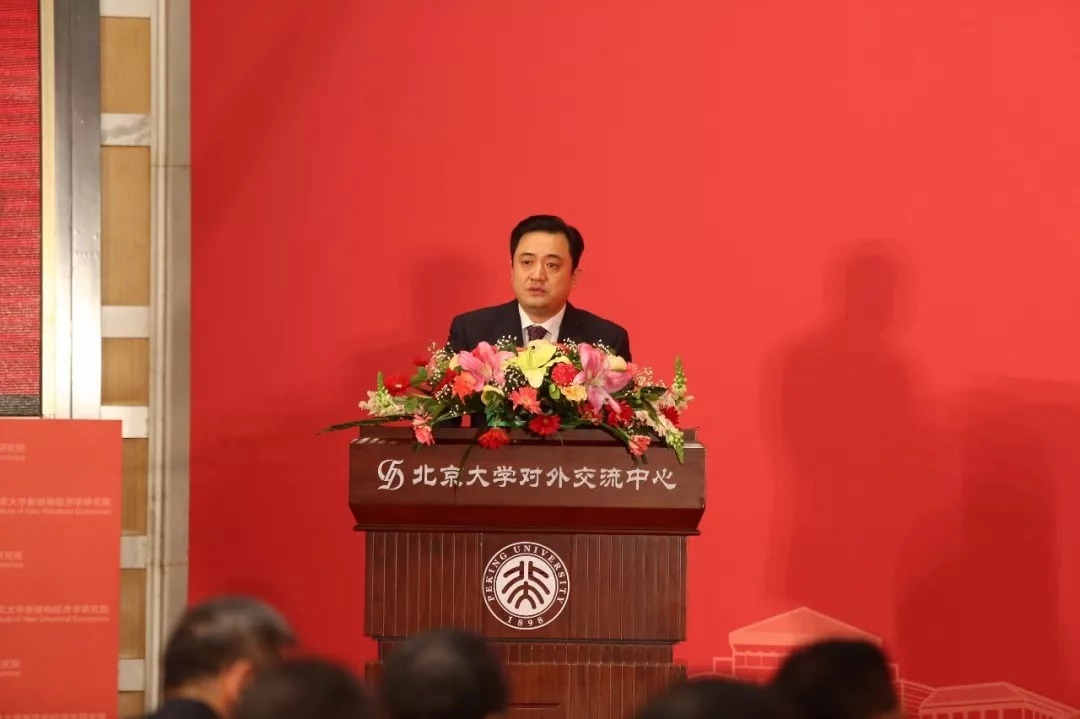 Lin Tian expressed his expection that INSE carry forward its practices in international development, help other developing countries from Africa and elsewhere in planning out their own development path and achieving prosperity, and contribute to “The Belt and Road” initiative. 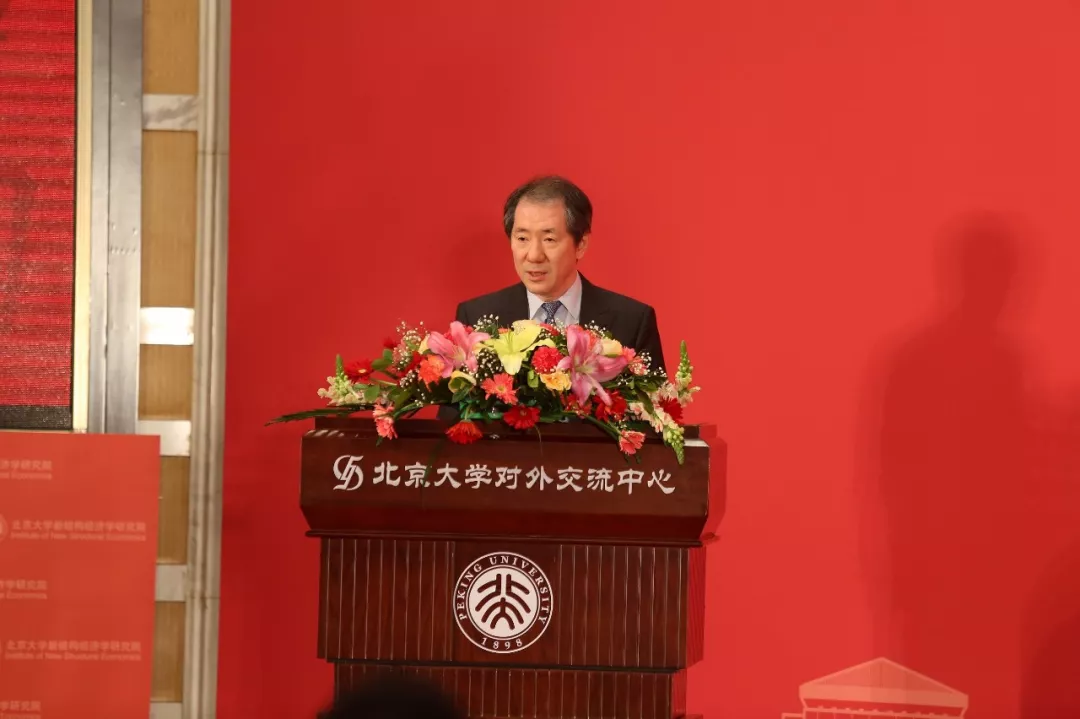 Dr. Pun Hoi Yu pointed out in his speech that “New Structural Economics” is the only economic theory system that is originated in China with worldwide influence. It is not only valued in developing countries in Africa and Asia, but also recognized and applied in Poland, which has entered the rank of developed countries, demonstrating the prospect of Chinese experience and Chinese theory in the world. 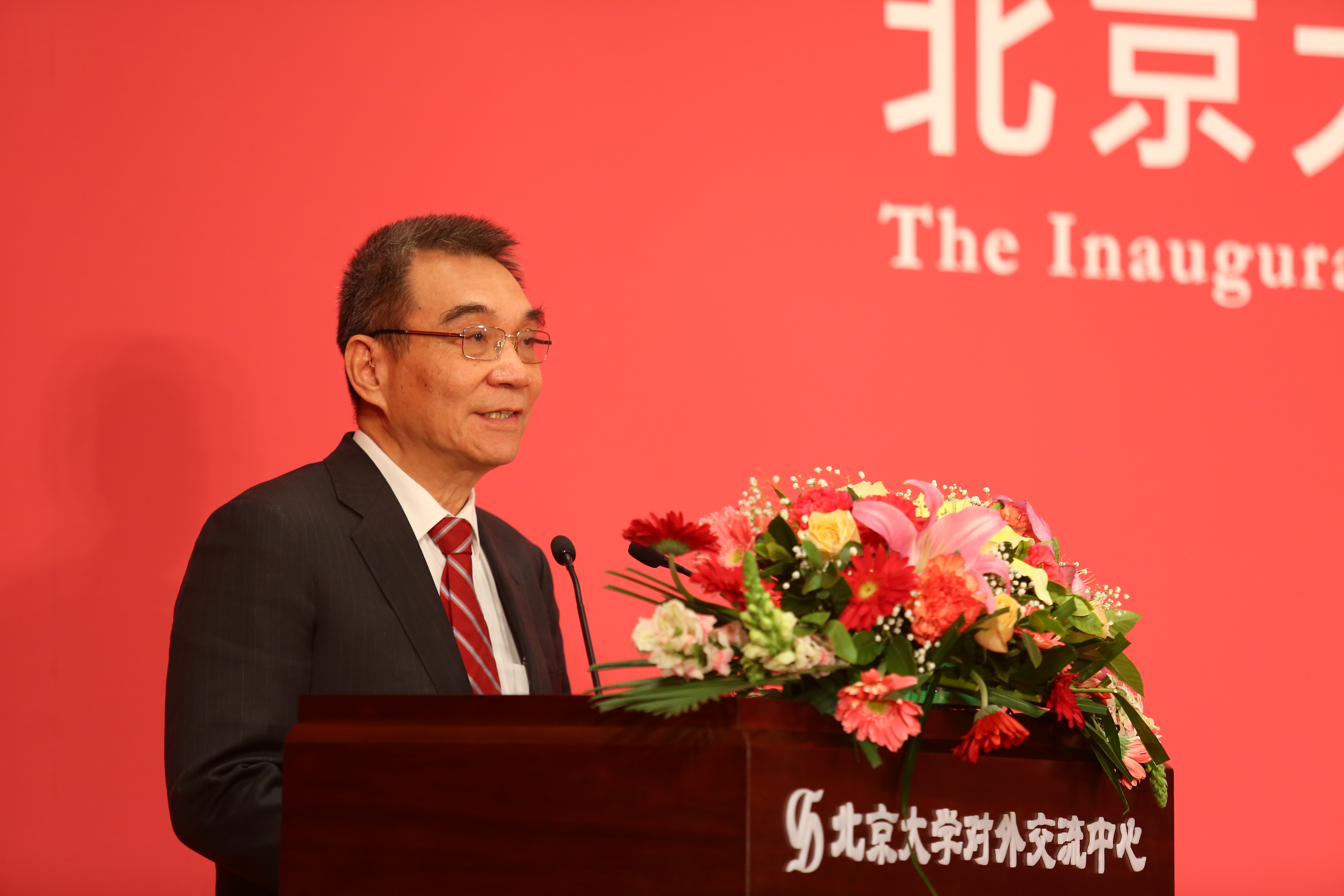 Justin Yifu Lin, Dean of INSE, expressed his heartfelt gratitude to the participants and the conference staff in his welcome speech. He pointed out that purpose of economic theoretical research is not only to help people understand the world, but more importantly to help people transform the world and benefit the world. The achievements made since China’s reform and opening-up are miracles that have never been seen in the history of the human economy, and are the gold mines of theoretical innovation. Based on the reflection on the success or failure of mainstream economic development theories, the introduction of “New Structural Economics” is an effort to summarize the experience of China’s and other developing countries’ success or failure in order to carry out theoretical innovation. Based on the development experiences of China and other developing countries, INSE aims to deepen the theoretical innovation, application and promotion of New Structural Economics and build an academic research base that leads the international development trend and a world-class flagship think tank institution. 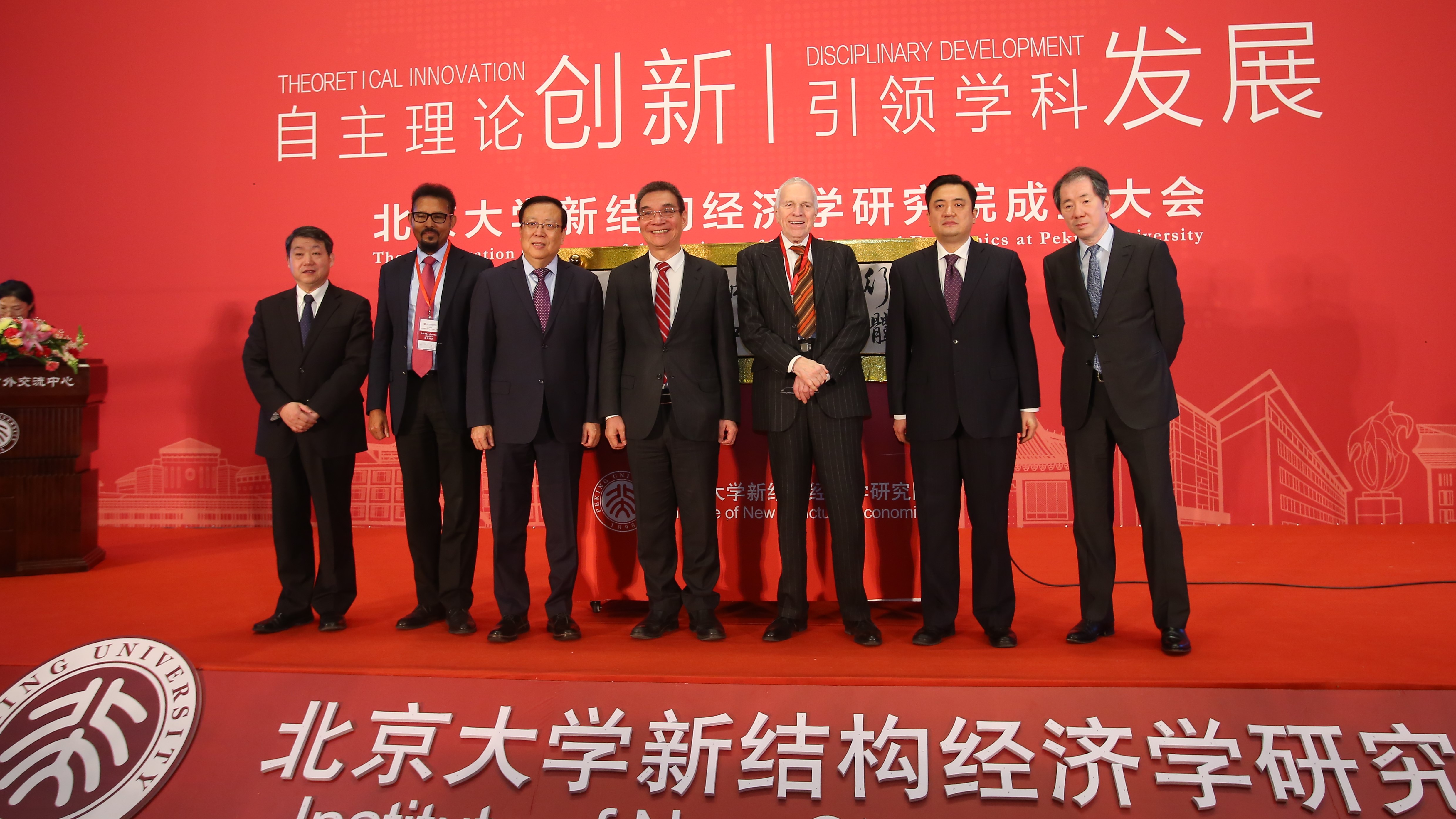 INSE is China’s first scientific research institute with the aim of pursuing independent theoretical innovation in social sciences. It aims to deepen the theoretical innovation, application and promotion of new structural economics based on the development experiences of China and other developing countries, and build an academic research base that leads the international development trend and a world-class flagship think tank institution. Formerly known as the Center for New Structural Economics at Peking University, which was founded in December 2015 by Professor Justin Yifu LIN, who is the former chief economist and senior vice president of the World Bank, the center is one of the pioneering China Top Think Tanks.