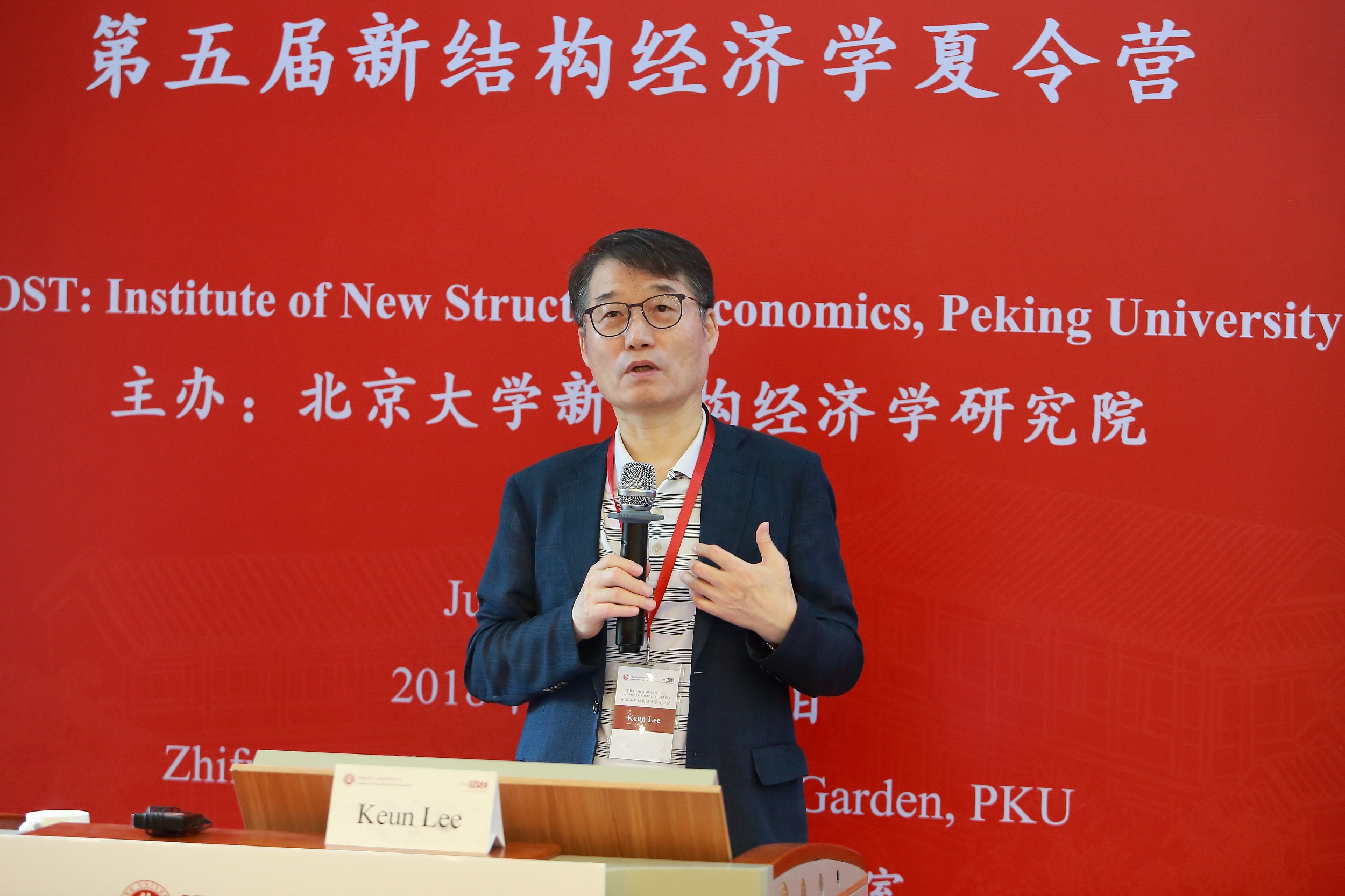 If we consider latecomers’ catching-up attempt as jumping out of a window, some fall on the floor unfortunately, but others can still catch-up with forerunners by taking detours (e.g., capability building) and flying on a balloon (leapfrogging), even when the ladder to rich economy is kicked way. What is catching-up? Developing countries close the gap with developed countries in following levels: (1) national level: per capita income, share in world GDP; (2) firm level: market share, sales growth, productivity; (3) technologies level: patent counts, R&D/GDP, etc.

The way to catch-up are creating a new path and trying to leapfrog. For example, we usually find that although straight road is shorter than detour, straight road is really crowd and detours may be not sometimes. So we can drive faster on detours and reach destination earlier. As developing countries, they don’t have to catch-up by routine way, detours and leapfrogging may be a better choice. As shown in data, Korean and Taiwan, China has achieved catching-up beyond the middle income trap, China keeps catching-up, but many other Asian countries fail.

Some scholars believe the reason is about institution. For example, Acemoglu and Robinson proposed the theory of “extractive vs. inclusive institution”. However, the theory relatives more in poor and pre-modern countries, but there is less difference in middle income countries. We confirm that the national innovation system (NIS) plays an important role of catching-up, even determines competitiveness of nations and their economic growth. We also found that countries adopt different growth mechanisms at different stages (from low-income to mid-income and from mid-income to high-income). The key transition variables and policies are taking detours and leapfrogging. They choose detours due to two failures (firm capability and size) and a barrier (intellectual property rights, IPR) in the North. Firm capability failure is intrinsic difficulty of building innovation capabilities in the South. Size failure is lack of big businesses in the South, which are filled with small and middle entrepreneurs (insufficient to be a high income status). We found big firms are really important in catching-up countries and developed countries. IPR in the North, as barrier to catch-up by the South, also referred to the ladder (industrial policy) kicked away. In regression, IPR weakens the level of technology of exporters’ effect on export.

According to the failures and barrier, three detours can be used.

Detour 1 is from imitation to innovation. Without capability and strong IPR, nothing would happen. In regression, we found that IPR shows different impact in different stage. Patent right is positive and significant at upper middle and higher income countries, but not for poor countries. In other hand, utility model is positive and significant for lower group, but not for higher groups.

Detour 2 is about domestic value chains (DVC): from more global value chains (GVC) to less GVC for more DVC, and then return to more GVC again. What matters is not more participation at GVC, but creating more domestic value-added based on learning from the GVC, which is the way out of the middle income trap. After building some domestic value chains, you can be more global again as you send your factories abroad due to rising wages rates. Alternative to the linear view on GVC, my view is non-linearity, which is from more GVC to the stage of less GVC (creating domestic V-add) and return to more GVC again (internationalization of production). Trend of GVC participation in Korea and China both show “more-less-more again” pattern. Functional industrial upgrading in a given sector into higher value segments experience three Stages: own equipment-own design-own brand.

Detour 3 is from short to long cycle technologies, which also means from catching-up to mature NIS. I use 5 variables to measure NIS: localization of knowledge (vs. reliance on foreign sources), concentration of knowledge creation (by assignees), technological specialization (short vs. long cycle technologies), originality of technologies (by citing and combining widely) and technological diversification (wide vs. deep in patent portfolio). Why short cycle technologies matters? We describe cycle time as the speed of change in the knowledge base of a technology, mean citation lag or time difference between the application year of the citing patent and of the cited patents. To catch-up, specializing in short cycle technology based sectors is important because old knowledge would be quickly obsolete and new knowledge tend to emerge more often, which offers opportunity to latecomers. Korea and Taiwan, China both show long-short-long cycle trend. The index of NIS is positive and significant to the growth of GDP per capita. 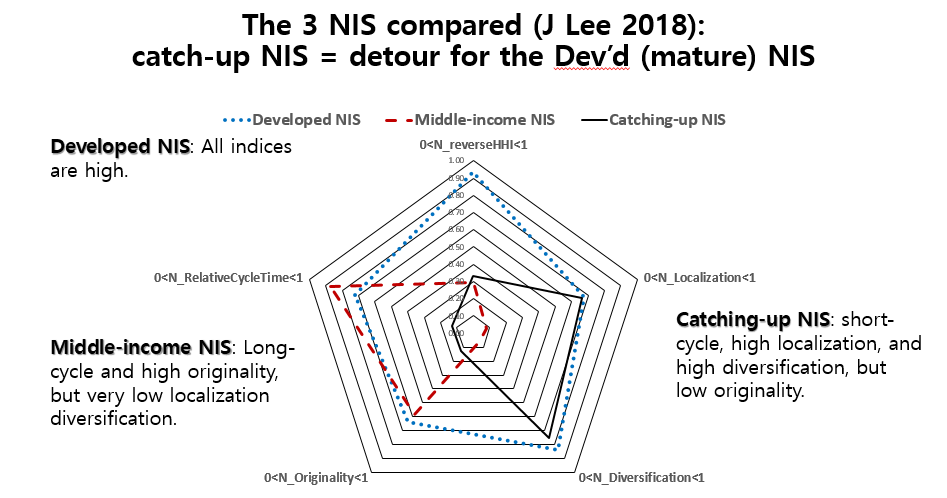 With detours as pre-conditions, latecomers can go to leapfrog at the final stage (long jump across product spaces), like flying on a balloon when the ladder to catch-up is kicked away. If detours are sufficient, latecomers can do something new ahead of forerunners (leap over the incumbents). There are two benefits from leapfrogging: overcoming IPR barriers and avoiding direct competition with incumbents. Different from long jump, leapfrogging is a jump not to different sectors or spaces, but to different generations of technologies within the same sectors. So, it would be less difficult than long jumps to different and unrelated sectors, but need to have built up sector-specific capabilities (prepare a balloon). On the other hand, leapfrogging needs to take care of two risks of choice among alternative technologies and existence of initial markets, which calls for government activism (industrial policies), unless you have patient capital. Furthermore, we can’t fly balloons every day, but have to wait for a good weather (window of opportunity), such as technology, demand and government. These years, the best time for leapfrogging maybe New Energy Revolution (renewable energies) to replace fossil-fuel and the 4th Industrial Revolution.

If not taking detours, the process of capability building would be derailed and delayed and the country would miss the opportunity of catching-up.